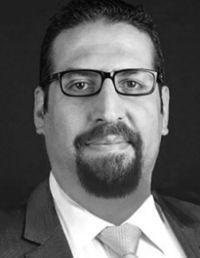 Lawyer since 2002, Me Korbatly began his career in Lebanon before being called to the Barreau du Québec in Canada where he now runs his own firm Korbatly & Associates, a multidisciplinary boutique law firm.

During his career, Me Korbatly practiced in many areas of law including corporate, civil, family and criminal law.

He attended several courses in international commercial arbitration, mediation and good governance practices within boards. He also obtained a certificate in Project Management from McGill university in Montreal.

Through his network, Me Korbatly provides services in strategic policy advice in front of all governmental levels federal, provincial and municipal. These services include support of any organization or company in front of the concerned authorities. They also include the analysis of various bills and preparation of all interested parties in their testimony before parliamentary commissions or other public hearings.

Among his international activities, Me Korbatly represented Lebanon in 2008 and 2009 in Sweden and Jordan in a training seminar about Transboundary Water Management-TWM in which he was trained in negotiations between countries on the various disputes arising from sharing these waters.

Me Korbatly is very involved in his community and a member of several organizations social, professional and political.

He currently sits on several boards.

On the other hand, Me Korbatly has been in the Japanese martial arts world since 1987. He has a 3rd Dan Black Belt in Aikido and 1st Dan Black Belt in Karate. He founded in 2010 the first Iwama style (Takemusu Aikido) Aikido school in Quebec called "Way of the Samurai Aikido Academy".

Represented Lebanon in 2008-2009 in a Trans-boundary Water Management (TWM) in Jordan and Sweden.

Leader of the month (Dec 2012) for the Young Chamber of Commerce of Montreal.

Several trophies for my contribution to Beirut International Marathon.