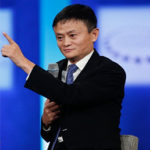 Jianlin as the richest man in China, according to estimates by Forbes.

The chairman of China's e-commerce giant was worth $30.9 billion compared with Wang's $30.7 billion as of Friday (May 12). So far, Ma's fortune has gained from an over one-third increase in Alibaba's share price. To illustrate, Alibaba's trading fell to just below $70 in 2016, but its stock closed at $120.34 in New York last Friday.

Alibaba also holds the record as the biggest public stock offering in the world for its IPO in 2014 in New York. Its stock gain also benefitted Japanese firm Softbank Group and Yahoo, which hold a 32 per cent and 15 per cent stake respectively, in the company.

China's list of wealth rankings has been topped by either Ma or Wang these past few years. In fact, the real estate tycoon Wang and his son Wang Sicong recently topped the 2017 New Fortune 500 rich list, published last May 9 by New Fortune magazine. Although they remained on top and recorded a personal wealth of $25.99 billion, their fortune slipped by 9.5 per cent from $29 billion in 2016. Ma, on the other hand, increased by 24.3 per cent.

Forbes noted that the list could potentially see another shakeup, after a run-up in the stock price of Tencent Holdings, owner of WeChat messaging platform. As of Friday, Ma Huateng, Tencent's CEO, was worth $29.7billion.

Meanwhile, the development of the capital market in China has boosted the A-share market to become a main rich maker in the mainland. In 2003, nearly half of the rich people's listed companies were listed on overseas stock exchanges, but that figure dropped to nearly half (27 per cent) in 2012. Source: CHINA TOPIX – Photo: Jack Ma, Executive Chairman of Alibaba Group speaks on stage at the closing session of the Clinton Global Initiative 2015 in New York City (Getty Images).