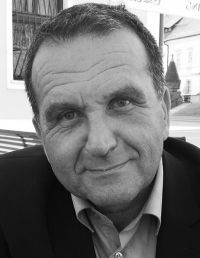 Berislav Čižmek was educated in Business Economy at the University of Zagreb graduated his Master Thesis in 1981 at the same University. Started his business career as Sales/Export Manager in Elcon, Croatian company producing electro cables for the automotive and household appliance industry, working with the leading global brands like Renault, Peugeot, Citroen and Bosch.
In 1989 he joined Zagreb Fair, one of the leading trade fair/event/conference organizers in Central and SE Europe where he was holding several positions at Board level focused on international relations, marketing and organisation of events, fairs and conferences (organisation and supervision of more than 500 international trade fairs, congresses, conferences and other events in Zagreb and abroad). He was also a member and deputy director of the project team for the Croatian Pavilion at the World Exposition, EXPO 98’
in Lisbon.
He participated in the work of several supervisory, administrative and professional bodies in national and international associations and institutions; was a member of the Zagreb Tourist Board Council and a member of the Management Board of HRPSOR (Croatian Business Council for Sustainable Development), in one term he held the position of Vice President of HRPSOR as well. From 2001 - 2006 he was Chairman of the Marketing Committee in The Global Association of the Exhibition Industry UFI, with headquarters in Paris.
In 2007 he started CBBS, management consulting and EU lobbying company focused on strategic partnerships/joint venture projects, M&A, internationalisation of business and lobbying on national/EU level. Since 2011 the company is listed in the Transparency Register of European Commission and European Parliament.
CBBS developed good co-operation working in different projects with governmental bodies and institutions in Croatia, the Ministry for Entrepreneurship and Crafts, Ministry for Foreign and European Affairs, Ministry of Economy, governmental agencies, foreign Embassies in Croatia, science and business community in Croatia. He is also working closely with different Croatian, European and regional associations: HGK (Croatian Chamber of Economy), HUP (Croatian Employer’s Association), HRPSOR (Croatian Council for Sustainable Development), ACES Europe (European Capital of Sports), ELO (European Landowners Association) Brussels, CEFA (Central European Fair Alliance) Vienna and other European associations.
Berislav Čižmek is M&A Advisor and International Business Consultant, and joined CBA Cross Border Associates as such in January 2015.

Master of Economy, Coach of Entrepreneurship