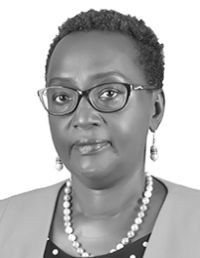 Chantal Ruvakubusa, Burundian, is born on May 22, 1961. She studied Law at the University of Burundi and completed her DESS in the Ecole Nationale des Impôts de Clermond-Ferrand, France (1995-1996).

She started working with the Government of Burundi in 1987 within the “Inspection Générale” des Finances following by the Tax Department that created for her an opportunity of reinforcing her skills in administration tasks. She was also heading the reforming the Burundian tax code.

As President of the Tax Reform Commission, she has been very involved in the successive reforms of the General Tax Code since 1997.

In 2008, she was heading the development of the Burundi investment code within a group of four tax specialists who developed it.

She increased her experience in public-private dialogue in participated in 2011to 2012 to the EAC Business Network Meetings funded by the Danish Chamber of Commerce where she was representing the Burundi Federal Chamber of Commerce and Industry. All the Chambers of Commerce in EAC were representing in the EAC Business Network. Her objective was developing Advocacy Position Papers in the harmonisation of VAT, in strengthening the EAC dispute resolution system, in reinforcing the EAC International Standards.

From January 2011 to October 2012 she joined the WBG, in the Investment Climate Program as a Tax Consultant working on the simplification of taxation and procedures of small and medium businesses. She customised a questionnaire for a Tax Compliance Cost Survey and the perception of taxation by the informal sector in Burundi and the surveys included 250 companies that are registered (referred to as companies “formal”) and 700 companies that were not registered (referred to as companies “informal”). She was in charge of drawing the draft report including the key findings and analysis. And one of the objectives of the surveys was to serve both as a benchmarking tool (in-country as well as regional) and provide valuable inputs into policy and design recommendations for an improved SME tax system by recommending changes to the SME tax system including increasing awareness amongst businesses of tax obligations and tax compliance requirements and following up the implementation of tax reforms components.

Barriers to tax compliance are a key cause of low levels of participation in the tax regime and low levels of revenue generation. In this context, she has also made some relevant comments on the new draft laws on direct and indirect taxes and the tax procedures code working closely with the Burundi Revenue Authority (Office Burundais des Recettes/ OBR).

In addition, she contributed in the improvement of Burundi’s ranking in the Doing Business 2012 and 2013 as recognition a VPU Team Award was granted to Burundi Investment Program. In 2011, she was in charge of all the indicators of DB (solving insolvency, paying taxes, dealing with construction permits, protection Investors). The job was consisted of assisting the Technical Groups in advisory and in preparing periodic progress reports and the final report.

As IFC’ s Tax Expert, she has participated in three scoping mission in Ivory Coast, Central African Republic and Rwanda where she acquired a big opportunity of working under the guidance and leadership of Senior Tax Experts on several issues like interviewing key stakeholders from government agencies, private sector and development partners. Gathering, compiling and summarising previous diagnostics and analytical work available on the tax system and drafting the diagnostic report with the key findings during the missions were also included.

With regard to the development and evaluation of tax policy, tax administration reforms, strategies and action plans, Ms Chantal Ruvakubus, while she was the Commissioner of Domestic Taxes and Non-Fiscal Revenues from 2012 to 2016, led and developed numerous programs to support the OBR in tax policy and administration funded by various donors: WBG, IMF, AFRITAC Center, EAC / GIZ and TradeMark East Africa (TMEA). She increased her knowledge in many topics like tax policy, tax administration, taxation of the mining sector, international taxation by piloting the tax reforms planned in the IMF-financed project through the Tax Policy and Administration Topical Trust Fund (TPA-TTF).

As a member of the EAC Fiscal Affairs Committee, of the EAC Policy for the Harmonisation of Internal Taxes, she has a perfect knowledge of the tax policy of the sub-region as she has participated in several adoptions of legal instruments such as the EAC Directive on Alignment of Tax Procedures, the EAC Tax Incentives Harmonization Roadmap to be presented to the EAC Council of Ministers of Finance and Economy.

She has relevant experience in working with academic Institutions from Anglophone and Francophone African countries such as IMF, WBG, IBFD, ATAF and CREDAF and she is a Certified Evaluator of TADAT.