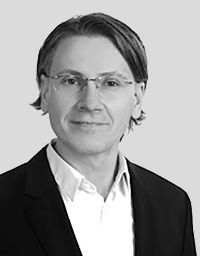 Edvards Merhels has been in professional services business since 1994. Until September 1998, when the Merhels company was founded, he worked in the Riga office of Price Waterhouse, primarily being involved in the audits of commercial banks. Since autumn 1999, Edvards has been accredited as a Latvian certified auditor. In 2000 he became a member of the Association of Chartered Certified Accountants (FCCA).

While Edvards has participated in various audit and advisory engagements to a diverse range of organisations, he feels most inspired in handling transaction advisory related engagements, for example, financial due diligences and business valuations. His other fields of activity inter-alia include statutory valuations of in-kind contributions, forensic investigations, corporate taxation of companies and assessment of economic losses. Edvards as well has lead advisory experience.

Until 2010 Edvards was a long standing member of the Quality Assurance Committee at the Latvian Association of Certified Auditors.
Edvards Merhels joinded CBA in December 2015 as Tax Expert.