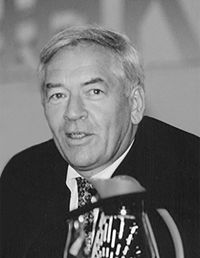 Frank K. Westermann is Honorary Consul of The United Mexican States in Hamburg for the Federal German States of Hamburg, Mecklenburg-Vorpommern and Schleswig-Holstein.

Born 1949 in the German town of Mülheim/Ruhr, Frank graduated in 1970, studied Economics, and began his career as trainee with Deutsch-Südamerikanische Bank AG, Hamburg (Dresdner Bank Group) in Chile, Colombia, Bolivia and Ecuador in 1975 to 1977. In 1978 he became Deputy Head of ABECOR (Associated Banks of Europe) – offices in Mexico-City in 1978 (til 1979), followed by Deputy Head of Credit and Loan Dept. Deutsch-Südamerikanische Bank AG, Hamburg (1980 – 1981), and Head of Dresdner Bank Group Representative Office, Mexiko-City (1982 – 1987), Director and Head of Banco Nacional de México – BANAMEX – Representative Office in Frankfurt am Main, Germany with subordinated offices in Paris and Madrid, responsible for the Bank’s activities in whole Continental Europe (1988 – 1997).

From 1998 to 2004 Frank Westermann was the CEO and Member of the Board of Ibero-Amerika Verein, Hamburg (name today: Lateinamerikaverein), Association grouping German companies active in Latin America and The Caribbean.

2005 to today: The Foundation of the company LaConSA – International Business Development, Hamburg came in 2005, and in the same year received his nomination appointment as Consul Honorary of The United Mexican States (5th of April) with the extent of jurisdiction in the Federal States of Mecklenburg-Vorpommern, Schleswig-Holstein and Hamburg, different honorary posts with a wide network throughout Europa and Latinamerica. LaConSA has brought several important German investments to mainly Mexico as the consultant for the German Headquarters.
Exclusive agent for a couple of high tech products in Mexico
Assistance of Mexican companies wishing to penetrate European markets

Honorary Consul for the Mexican States in Hamburg