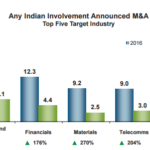 NEW DELHI: Calendar 2016 was a year of big-sized merger and acquisition (M&A) deals for India Inc, with data showing a record high $72 billion worth of agreements during the year, even as the number of deals stood the same as in 2015.

Among the transactions announced, $33.1 billion worth of deals have already been executed. This is 9.6 per cent higher year on year in value terms ($30.2 billion in 2015), even though the number of completed deals fell 9.4 per cent. Read more