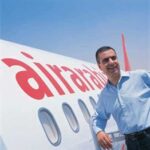 According to Airfinance Journal the The Top Ten airlines were announced based on data from The Airline Analyst, which presents airline financial and operational data using a custom airline industry analytical template.

The Top Ten are

Air Arabia’s CEO Adel Abdullah Ali (pictured) is well known for being at the forefront of the development of modern aviation.  His innovative achievements and contribution to air transport and tourism sector in the wider Arab world are globally recognized. He managed to transform Arab aviation in October 2003 when he set up Air Arabia, the Middle East and North Africa’s first low-cost carrier (LCC), opening up a market niche in the region whose existence few had suspected.