Trade between EU and Great Britain collapsed after Brexit 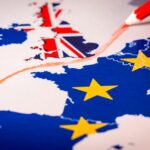 Trade between the UK and EU countries has fallen significantly after Brexit. According to figures released by the UK statistics agency ONS on Tuesday, trade volumes in the first quarter of this year were almost a quarter (23.1 per cent) lower than in the same period of 2018, which is considered the last stable trading period.