Iraq is suffering a lot from a great lack of chlorine as the number of chlorine plants in Iraq are very few, they were installed since many years ago and become very old . Some plants went out completely, others are suffering from a lot of breaking down and decreasing in production . Chlorine lack in Iraq caused in circulation of a lot of diseases and severe shortage in potable water.

Our company has an old chlorine plant, it was installed in 1979, and it’s equipment become ancient and has no use anymore. The plant stopped since more than six years ago and there is an urgent need to install a new plant for humane needs. The new plant products will participate in sterilising water and exterminate the diseases which menace the life of citizens. Also the new project will offer 120 jobs for young people who have no jobs now. 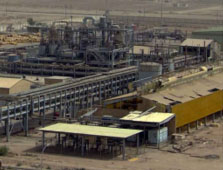 Mr. MiklosZabori, who was the superviser on chlorine projects in Iraq / United Nations Inspector) during the blockade on Iraq in 1990 and after, has visited our plant at that time and he knows well about our plant situation and the suffering of Iraqi citizens.

The new plant will be according to the latest techniques using economic membrane cells and it is environmentally friendly . The new plant will produce in addition to chlorine, caustic soda, HCl and sodium hypo chlorine which is used in homes for sterilising, it can be packed in plastic containers and sold in the local markets.

Plant cells will be two cells of BIPOLAR kind taking into account to leave enough space for five additional cells for VCM requirements of chlorine. It will be possible to isolate one cell and leaving the second cell in operation. Cathodes and anodes will be changed each eight years while the membrane will be changed each four years .The plant will operate in fully automatic DCS system while the operator duty will be observation only.

The plant is independent from the other plants in the company and it is possible to use some of the old plant facilities especially OSBL( water, electricity, air, N2, steam.

Basra is a secure place in Iraq.